I’ve been doing a bunch of things, trying to get ready for the “public” debut of the State Belt this October.   I plan to host several sessions around the Minn-Rail timeframe, some as official scheduled ops and others as can be fit in to suit the schedules of the out of town guests.

To that end, I’ve been trying to do a bunch of smallish things to make the layout more friendly towards guests.   Every cross street is labeled (Stockton, Bay) with more or less accurate San Francisco style street signage.   Each industry gets a label on the spur on the fascia (since the industries themselves don’t have much in the way of signage yet, see Stauffer Chemical  or Simmons Co). 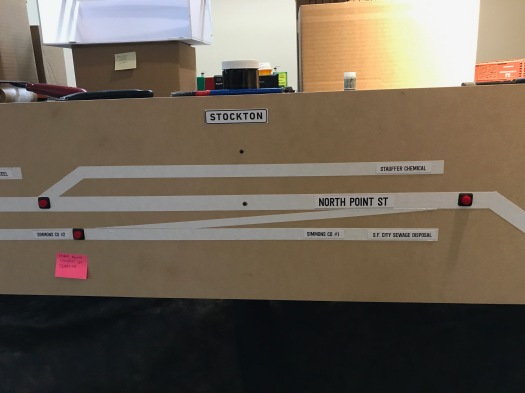 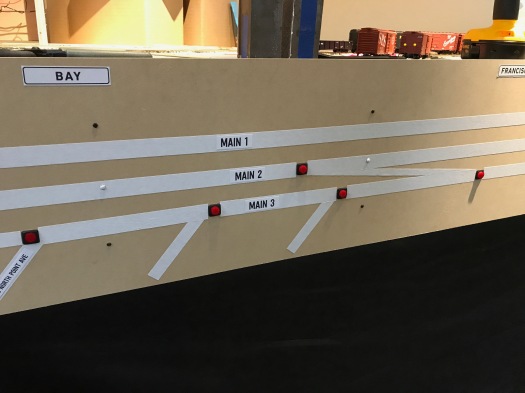 Each turnout button is more or less directly out from the points, making it fairly easy to match the arrangement on the fascia to the trackwork on the layout.   The track lines are (for now) artist’s tape of various widths.   Someday, I hope to paint on more durable artwork, but this will certainly do for now.   This is probably what you’ll see for the next several years.

I’ve also been working on the pavement along North Point.   Running tracks in the street are to be buried in pavement, but the spurs where cars can be spotted are laid in with cobblestones.   This is DAS air drying clay, with the cobble stones rolled in using some nifty tools.    This still needs some work, since there’s a little too much sinkage at the ties.   I’ll write more on this as I get it all figured out.

The bulk of the recent tracklaying work is done, with an overview shot here prior to cleanup.   Every tool seen here has been used within the last couple of weeks.   For the next op sessions, instead of a couple of pieces of flextrack serving as the car float interchange, the crew will be able to make their way over here to North Yard and make a block swap.    Eventually, the wharf job crew will be responsible for the car float that will be over here as well.

Below table work needs to be done here yet.  This include switch machine installation and track feeder connections to the DCC bus.

I’m also working on some paperwork to help a crew find things.  The first one is an Industry List, much like the prototype’s.   Look up “Musto Keenan” and you’ll find it listed as “535 North Point / Taylor”.   Now that the street signs are on the fascia, it should be easier to find places.    I’ll expand the overview map as well.

My goal is to have everything that I like to see when I come to a layout for the first time.   Easily readable paperwork that makes it clear what work needs to be done (handled via the B-7’s).   Maps showing where things are.  Signs for every industry.   Signs for major locations.

Other goals to make it nice for the crews include:

I have apparently not made the op session hard enough.   The crew has enough time for mirth & frivolity.

Don’t worry.   I’m not trying to be a cruel and vindictive dungeon master as I set up the op sessions.   I want the crews to have fun.   Since one crew member pictured above was back for a repeat visit, I may have captured photographic evidence that fun has been had and that the layout is worth a second visit.

At the last flea market I went to, I picked up a number of cars that will help populate the car fleet more appropriately for the Bay Area.   WP, ATSF and NWP cars have been added to the fleet, as well as one of the Chateau Martin house tank cars.   The basic survey of wheel gauge checks, coupler heights measurements, and truck swivel was performed, and they’re all in service now.

A number of additional Tortoise switch machines were procured as well, so I believe that I now have plenty for the State Belt, and a number of machines from the previous batch that work just fine but where the internal DPDT switch contacts do not function.   There are a few people in the area who can use these motor-only machines without much trouble at all, so they won’t just sit on my shelves gathering dust.

I’ve asked my crews to drop a flag every time that a car or engine derails that’s not obviously the crew’s fault (e.g., running through a switch isn’t interesting). Ideally, they’ll put a note on the flag with the car number and any other relevant information (direction of travel, orientation of car, etc). I provide several different colors of sticky notes (hey, 3M is local, so I use actual Post-it® Notes), and give each crew member a pad.

The switch into Ghirardelli was a notable problem, with about a dozen notes at the end of two sessions. Really, I think every move over the switch didn’t work, as long as the switch was reversed. Normal wasn’t too bad. Definitely trouble with the switch, because the cars listed varied a lot.

It didn’t take too long of careful investigation to determine that the guardrails were missing on that particular switch. Now some people will claim that a switch shouldn’t need the guard rails, and that problems with their absence is a sign of a poor switch. I’m not one of those people. Nothing else about the switch was out of tolerances (handy dandy NMRA gauge to the rescue). Shortly, two new guard rails had been installed and testing proceeded to show happiness.

The third session was held after that repair job, and I’m happy to report that *NO* flags were thrown there at all during the course of the session. And, yes, that track did get used, so I know that there was movement there.

During this last session, few flags were thrown, and they varied more in location. I think each was at a place where at least one other flag has been thrown, and some were the same car at that particular spot. There are a couple of cars that I am still running with crappy wheels. If I can get them to work properly, I think everything else should be fine.

That’s the third op session now. 97 to go before I have to make T-shirts.

At 1:30pm today, engineer Vos (P), along with conductor Vos (D), started a shift at the State Belt enginehouse.   After a quick stop at the clerk’s office to pick up some B-7’s, the crew made their way to Pier 43, where they picked up 8 cars off an inbound Santa Fe car float.

Over the course of the next two hours, 9 cars were spotted at their destinations, and 10 cars were picked and delivered to their interchanges (9 for the next ATSF float and one shoved down to the SP interchange at King Street).

Operational difficulties were kept to a minimum.   The track crew will need to inspect a couple of turnouts, and the car maintenance crew will be busy as well, since the rolling stock fleet just came out of storage for the first time in 4 or 5 years.

I wasn’t at all sure how quickly cars would be moved.   I’d prepared for 3 inbound float’s worth of cars, at 8 cars per float, along with around the same amount of work to be performed making pickups.

As it turns out, only one float’s worth of car were spotted over the course of about 2 hours.   That’s not disappointing at all; I honestly had no idea how long it would take.   It’ll be easier the next time, said one crew member, because the “start-up effort” of figuring out how things work will be reduced (provided he can remember from one session to the next).

But this session serves as the culmination of a lot of work to get to this point.   Benchwork, track laying, wiring, fascia controls, car movement paperwork, and more.   The next chunks of construction will go much faster, as I won’t have to do everything from scratch.    For example, the next track work will probably be the 3rd “main track” along the north part of Embarcadero, including the spurs off into the piers.   As each pier is set up, and the track laid, they’ll become operational very quickly since all of the power & DCC wiring is in place.   The notion of building upon what’s already there takes over.

So I’ve got some debugging to do on a couple of noted track locations.   And some tweaking on cars that have been in boxes for a long time.   Nothing too serious, and certainly nothing that will stop me from having additional op sessions over the next several months.

And continuing to do more construction as well.