A few days ago, I posted a map of the North Point / Beach Street “branch” of the State Belt.  Now, using my sophisticated planning tools, I’ve got a pretty good idea of what is going to fit in the space I have available.

These are templates from Fast Tracks for the size of switches that I plan to use.  The crossover is set up for 2″ track spacing, which suits what I need.   I have a pile of these printed up, and lay out track arrangements with these.

I’ve annotated the left & right hand templates with information for when I lay the track — I have a box of switch ties pre-cut to the necessary lengths, as indicated adjacent to each tie on the template.  I glue the template in place, then glue the wood ties to the template.  Then I can put the pre-built switch into place and I’m ready to move further down the line.

I also have built a number of building mockups out of about-to-be recycled boxes from work.  These range from 2 to 8 stories in height, and are about one half to one third of a block in size.  Since these streets have significant structures on each side, I want to get the feel of the visuals as well as the mechanicals of the track arrangement.

The picture above is North Point, running past several different industries (see the map link above).   I like using “false fronts” along the aisle to indicate that those are active buildings as well, instead of placing a spur right alongside the immense drop-off of the benchwork edge.  I used this in a couple of places on the St. Paul Bridge & Terminal, although I’m taking it up a notch with several buildings in a row.

I’m mixing taller & shorter buildings in front, in an attempt to provide suitable access for everyone to be able to reach in and uncouple cars as needed.   I’ll be putting turnout controls on the fascia (either Blue Point mechanicals or some servo controller), so no reaching in for ground throws. 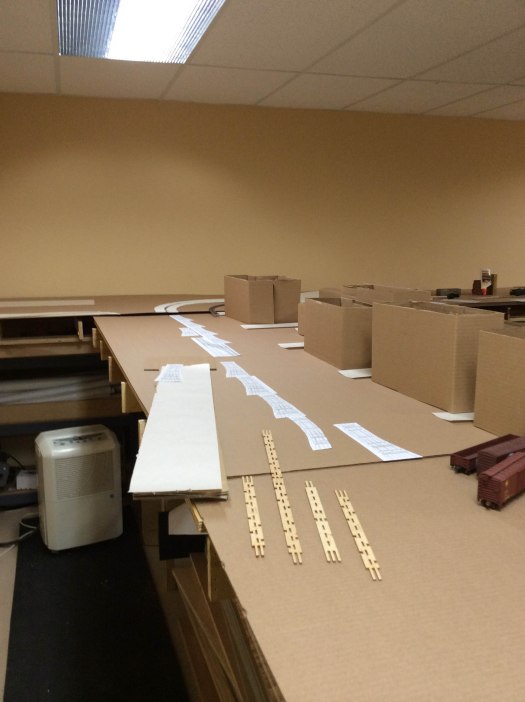 This shows Pier 43 1/2, which is one of three car float aprons on the north end of the railroad.  Alongside that pier is a small yard which I can only imagine was used to stage cars for easy loading and unloading of the car floats as they came in.   I’ll have four tracks, which should be good for a three track float.  Further back is a small yard & team tracks, and off to the right would be Standard Oil, Harbor Warehouse, and the track to Ft. Mason & the Presidio.

The white rectangle is the mockup of the car float (for size).   I think that a small portion hanging off into the aisle is probably going to be okay.

This more or less accounts for one third of my available space.   I count 45 car spots, plus the float yard.

Now to work around the curves seen at the far end of this photo — double tracks following the Embarcadero along the various municipal piers and towards the S.P. interchange at King St.